When Is The Killing Of Innocent Black
Men Going To Stop?

.
I wanted to share a very interesting Blog Post by Justin C. Cohen regarding the two recent shootings of two innocent black men just going about their day until they came across encounters with police. WHAT the hell is going on in AMERICA?  When did people become SO immune to this disgusting break down of today’s Society in America? Are we getting closer and closer to the “End of Times” here on earth? Can someone explain this to me?

Yesterday, Alton Sterling was executed by a police officer in Baton Rouge, Louisiana. The video of the encounter is gruesome, and it should shake you to your core, no matter the color of your skin. The police tackled him to the ground, pinned him, and shot him at close range. By definition, this is an extrajudicial killing. It’s not dissimilar to what happened to Eric Garner, Laquan McDonald, Mike Brown, Sandra Bland, Rekia Boyd, and a long line of Black people who have lost their lives at the hands of a corrupt and racist criminal justice system. We know their names, and it’s up to us to say them.

I feel an extraordinary amount of anger and sadness today, but that pain cannot compare to what our Black friends and colleagues are experiencing. As a White person, I will never know the extent of this sort of pain. I can, however, offer some modest advice to other White folks who are trying to figure out how to be good allies on a day like today.

1.)  If you’re White, don’t look to your friends of color for answers today. If you haven’t already grappled with the extent to which our criminal justice system – from the police to prosecutors to prisons – treats Black people differently than they treat you, today is not the day to start reaching out. If you’re eager to learn, talk to other White people who have been engaged in this work, as one of their primary roles as allies is to lessen the burden that people of color have for the education process around issues of justice. Now also is a good time to do some independent reading and research. If data moves you, read Michelle Alexander’s The New Jim Crow, which catalogs the extent to which the American criminal justice system disproportionately, and unjustly, punishes Black people. Once you’ve spent some time educating yourself, then you should have some conversations with friends of color, but you should spend most of the time listening to them.

2.)  What happened to Alton Sterling is, in fact, about race. If you are tempted to change the subject to something else, please resist that urge. Police kill Black people at a rate disproportionate to both criminal activity and their presence in the population at large. Campaign Zero has done an extraordinary job of cataloging both the extent of this problem and its relationship to race. What happened to Alton Sterling does not happen to White people.

3.)  Be aware of a few standard, and racist, media tropes about Black victims. In the wake of police executions, you are bound to hear a few things that distract from the real issues. One of those storylines is that “he was no angel,” wherein the media will outline the various ways in which the victim behaved inappropriately in the past. None of this matters, and it certainly does not change the fact that the police killed the person outside of any legal process. I smoked pot when I was in high school, such as, and if the police used that as justification to murder me, that would be ludicrous. The second narrative that will emerge is that the killing of Alton Sterling is part of the “Ferguson effect,” wherein police killings are linked to increases in crime. This is not true, as there is no statistical connection between local crime rates and police killings:

The “black on black crime” crowd back at it again. No evidence to support their claims, all white supremacist pseudoscience.#AltonSterling

They’ll say black people are killed by police because of “crime” when there’s no correlation between the two issues.pic.twitter.com/VaY4zNMKlX 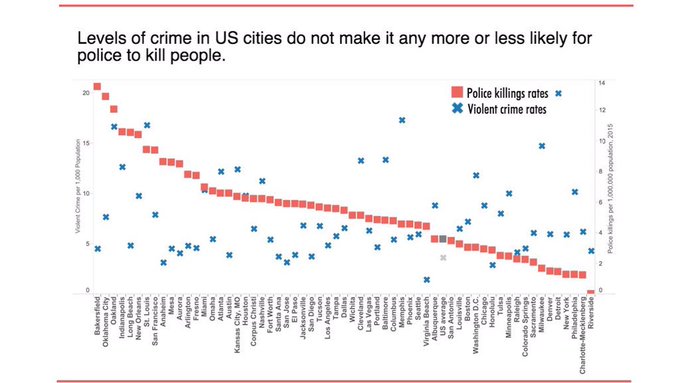 The final storyline to avoid believing is the notion that the real problem is “Black on Black” crime. Bringing this up is an attempt to change the subject away from the extrajudicial killing of Black people by the police. Not to mention, the vast majority of crimes are committed in racial groups, so “White on White” crime is just as prevalent as “Black on Black” crime.

4.) As a White person, you are in a unique position to influence the perspectives of other White people. If the illegal killing of Black people by the police bothers you, as it should, talk to your White friends about it. There are many nuances and ambiguities in institutional racism, but the police committing murder is not one of them. In many cases, having these conversations will not be easy. The more you talk about race, however, the easier it will become. You might even change some minds, particularly among family members. If you’re already spending time talking to other White people about race, now is a good time to help other White people develop their skills.

It is never too late to make a personal commitment to being a more active ally in the movement for Black lives. A year ago this month, folks were fighting to take down the Confederate flag from the South Carolina state capitol, after the massacre at the Emanuel AME Church in Charleston. A year ago this month we started wondering what happened to Sandra Bland. Correcting these injustices is the work of generations, not years or months. If you’re a White person on the sidelines, we need you in the fight.

“Now, of course, when my guest posted his blog post, there was another senseless killing of Philando Castile not long after and was live streamed on Facebook to prove that Philando Castile had not done anything to provoke the police. He was reaching for his wallet to get his licence and gun permit when the officer fired on him.
Then? Last night, we have a “Killing Spree” at a protest for the two slain men of Dallas Police officers? More killing and carnage of innocent lives. Wow! I have no words. No words except for what I wrote in the beginning of this post.

Is this what AMERICA HAS COME TO?
Look, there are people on both sides of this tragedy who are not going to agree about this whole mess. But it is NOT about who is right or who is wrong. It not about black or white, it is not about “black lives matter” or “all lives matter” it is about “Human Beings” being killed, lives being taken from families and loved ones.

DO YOU really think it matters what the color of your skin is when you are lying in a pine box six feet under the ground? Really? No, what matters is that another human being was killed in another senseless shooting. That is what matters here” . . . .

“My Thoughts, Love and Prayers go out to all the Families whose loved ones were Killed and Hurt in all the senseless killings this past week. This is to ALL LIVES TAKEN” .  .  .  .