The second volume in the Finding Billy Battles trilogy, The Improbable Journeys of Billy Battles picks up right where its predecessor left off. This time, author Ronald Yates’ intrepid protagonist finds himself on a steamship en route to the Far East, trying to assuage the pain of losing his beloved wife. It isn’t long before Billy is immersed in a tumultuous world of action, adventure, and danger, all set against the backdrop of ever-unfolding cultural and political events.

Featuring superb plot and character development, the most salient aspect of Yates’ tale is his inimitable storytelling style. Though he’s chosen late 19th century Asia as the subject of his latest offering, one gets the sense Yates could write about any number of different topics with the same compelling skill, and the result would be the same: a rich, eye-opening yarn that proves impossible to put down. In an era where the average attention span is as long as the next Snapchat video, this ability is a rare trait and indicative of true literary talent.

Rife with eye-opening action and engrossing details, The Improbable Journeys of Billy Battles treats the reader to the highly intriguing travels of a seasoned journeyman. Highly Recommended. 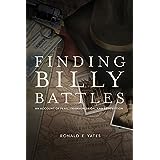 William Fitzroy Raglan Battles was born in 1860. Soon after his birth, his family moved to Lawrence, Kansas where he grew up and received his education, which included two years of college. At age 18 Billy, as he was called by most people, traveled west to Dodge City and began his career as a journalist, a career that would prove exciting and, for him, dangerous. In the next 15 years, he would travel through the Old West, which was struggling to change its status from “frontier” to “civilization.” He would meet many people and befriend the likes of Bat Masterson, Doc Holiday and the Earp brothers. Unfortunately, he would also come to know some folks who were quite unfriendly, like the Bledsoe brothers and their gang of thugs and murderers.

Billy Battles is a gentleman who never backs down from a fight. Although his early years were spent on a farm in the newly settled state of Kansas, he grew up in the city. However, he was all right with venturing off to the rough mining towns, like Leadville, Tombstone, Denver and Las Vegas. Backed up by his legendary friends, he always made it through the bad times, but not always unscathed. His was not a charmed life, but it did turn out to be a long one.

“Finding Billy Battles” is the first book of this trilogy of the same name. The author, Ronald E. Yates, himself a journalist, has given us a work of fiction that contains so much factual historical information about people and places, and presents it with such authenticity, using quaint but graphic dialogue spoken in the day, that you will swear it is based on a real person’s life. This book was an absolute pleasure to read. It kept me in the middle of the action and taunted me with brilliant foreshadowing of upcoming events. I cannot wait to read the next book in this series. 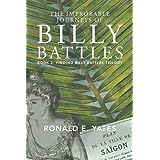 The Improbable Journeys of Billy Battles is a journey worth your time. Book Two
by; Cold Coffer Cafe

The Improbable Journeys of Billy Battles is the sequel to Finding Billy Battles. I jumped right into this book without reading the first in this trilogy and found it to be a compelling story based on fact and expanded by narrative fiction.

Ted Sayles who is the great-grandson of Billy Battles inherits Billy’s journals and while writing this trilogy he stays very true to the language of the late nineteenth and early twentieth century. While this book opens in 1894 with William (Billy) Battles heading for the Orient aboard the SS China it covers his time in the Far East, Latin America, and Europe.

It is aboard the SS China that Billy meets German Baroness Katharina von Schreiber. She is gorgeous and regal, far out of reach of a Kansas scribbler (journalist). Since you have probably read the book’s description I wrestle with what to share with you from this amazing story and journey that Billy Battles is about to embark on. So I have decided to quote this passage to whet your appetite. I quote:

“Katharina’s cabin was a bit larger than mine was, and like mine, its walls were covered with dark mahogany panels. In addition to the two overstuffed chairs and writing-table, she also had a small dining table. That is where we settled, she on one side and me on the other.

“I’m sorry, I have nothing to offer you to drink.” Then she paused, stood up, and walked to her wardrobe where she produced a tear-shaped bottle of Glenglassaugh single malt Scotch whiskey and two heavy cut crystal glasses. “Except for this.”
She returned and placed the glasses on the table in front of us. “May I?” she asked, and then uncorking the bottle, she poured two fingers in each glass. “This was my late husband’s favorite.”

I shuddered imperceptibly at that remark but pulled the glass toward me anyway. Images of Katharina pushing Baron von Schreiber over a cliff or poisoning him with arsenic-laced Wiener Schnitzler flooded my mind.

I forced those macabre thoughts out of my mind by focusing on the rich amber hue of the whiskey as I uneasily swirled the glass around and around in front of me.
What was I doing? I found myself thinking. Why was I in Katharina Schreiber’s cabin about to drink expensive single malt Scotch whiskey with a woman who had just admitted she had killed, but not murdered, her husband?”

Murder, mystery, intrigue, people, places and events that were intended to divert Billy’s attention from his past soon gets him embroiled in Katharina’s past, with the German government, not to mention Chinese and Malay pirates. Later on, he finds himself perhaps the first American to be involved in the Anti-French insurgency in Indochina which will later be called Vietnam and involve America. War will not end there as he is forced into the Spanish-American War while in the Philippines.

Just as life takes many unexpected turns for Billy Battles so will your desire to keep turning the pages of this book to find out what is it about Billy Battles that causes him to try to escape his past, endure his new reality and find measured peace as he heads into the twilight of his life.

I invite you to read The Improbable Journeys of Billy Battles as it is a journey worth your time. Be sure to read Finding Billy Battles (book one in this trilogy) while waiting for the author to write the final book in this amazing trilogy.

Author Ronald E. Yates life experience as a foreign correspondent for the Chicago Tribune in Japan, China, Southeast Asia, and Central and South America gives him the authority with which he writes. It is important to point out he won “three Pulitzer Prize nominations and several other awards, including the Peter Lisagor Award from the Society of Professional Journalists; The Inter-American Press Association Award for coverage of South America; and three Edward Scott Beck Awards for international reporting. He is a graduate of the William Allen White School of Journalism at the University of Kansas. He lives in Murrieta, California.”

“Cold Coffee Press/ Café endorses The Improbable Journeys of Billy Battles (Trilogy Book Two) by Ronald E. Yates. Ronald E. Yates is the author of the Finding Billy Battles (book one in this trilogy) and The Kikkoman Chronicles: A Global Company with A Japanese Soul, Aboard The Tokyo Express: A Foreign Correspondent’s Journey Through Japan as well as three journalism textbooks: The Journalist’s Handbook, International Reporting and Foreign Correspondents, and Business and Financial Reporting in a global Economy. ”

We reviewed this book from Kindle/PDF format. The review was completed on June 17, 2016.