So, I walk into this cantina in San Carlos, Mexico and see this guy with all these women hanging around him  . . . .  Ok, not exactly how we met.
The real truth about meeting my new buddy and fellow Author, Rico Austin is by way of ME being the Biggest FAN of the Discovery Channel’s show, Deadliest Catch and of Captian Wild Bill of the crab boat “Cape Caution.”

Now I know what your thinking, what does that have to do with the book promoting right? Well, Rico’s wife is also a “Uge Fan of the show too.”  The only difference is Rico and his wife actually got to meet Captain Wild Bill Wichrowski while they were visiting in Mexico. Here is a picture to prove it. AND I am still SO jealous! Lol. I had left a comment on one of Bill’s posts and I think Rico noticed I do book promoting. We became FB pals and BAM! I’m helping him promote his books.

If you don’t know Author, Rico Austin or have not read any of his fantastic books yet? Oh My,  you missing out. Start by picking up his current e-book promo book now only $.99 cents in the Amazon Kindle Store. It has over 60ish 5-star Amazon reviews. So here is part of a wonderful writer/author interview Rico did recently about his books, his writing, and life. Courtesy to and the full interview can be viewed here on Awesomegang .
.

Now I know what your thinking, what does that have to do with the book promoting right? Well, Rico’s wife is also a “Uge Fan of the show too.” The only difference is Rico, and his wife got to meet Captain Wild Bill Wichrowski while they were visiting in Mexico. Here is a picture to prove it. AND I am still so jealous! Lol. I had left a comment on one of Bill’s posts, and I think Rico noticed I do book promoting. We became FB pals and BAM! I’m helping him promote his books.

Tell us about yourself and how many books you have written.
I have written eight books and am about to finish my 9th novel.

Born and raised in Southwestern Idaho, Rico is the oldest of five boys, growing up in an area that was ripe for several adventures with his four younger brothers and numerous cousins. Rico grew up near farmland that produced potatoes, hay, hops, grain and corn. There were several fruit orchards and vineyards in the Snake River Valley as well, due to the extraordinary fertile soil.

A few years out of high school he moved to (the big city) of Boise and enrolled at Boise State University as a student and walk-on football player. However, he could not escape the allure of traveling the world and began writing and storing his experiences in hopes of someday becoming a novelist and writer. He began reading every chance he had. From contemporary novels to classical literature, Rico’s love of storytelling was uncontrollable. He attended occasionally at Boise’s former Comedy Club as a stand-up comedian, retelling his stories of growing up in a comedic fashion.

Rico earned an Associate Degree in Marketing and Sales from BSU. After a few years of low-level management positions, Rico moved to Hawaii for a short time, surfing the waters of Kaua’i and enjoying the outdoors. He then moved to back to Idaho. In 1991, Rico moved to the Phoenix/Scottsdale area and continued his education receiving a Bachelors of Business Administration in International Business at Grand Canyon University, named the “Outstanding International Business Graduate of 1995.”

That same year he was also selected as “Mr. Future Business Executive” at the State Leadership Conference which included all universities in the State of Arizona. Rico finished his Masters, an MBA in International Management from Thunderbird School of Global Management with a focus on the Latin American Region and the Spanish language.

Hollywood has even had an encounter with Rico. Those who watched Baywatch with the beautiful Pamela Anderson and David Hasselhoff might recall Rico Austin in a cameo appearance in the episode, “Night of the Dolphin” in 1997, where he played the role of a drug lord on a huge yacht with sexy chicks.

He and his graduate classmates watched the aired episode in the “old clock tower hanger” in the TV lounge. He was invited back for another episode by casting director Susie Glickman but declined due to a conflict with finals at Thunderbird. Rico chose education over stardom; when questioned why he responded, “No one can ever take your education away. Everything else can come and go and, most likely will.”

Rico is an avid fisherman and has traveled far and wide to cast his fishing line into many waters including streams, lakes, ponds, rivers, seas and oceans. He has worked for a few international companies as both a sales manager and a marketing manager. In his spare time, he has worked as a land developer and was a licensed Realtor in Arizona. Should you decide to visit Arizona, Rico would be more than happy to show you around his Great State of Arizona through his beautiful children’s book,  ARIZONA is where I Live.
.

Rico is happily married to a graphic artist from Minnesota, Connie. They make their homes in the “Land of the Sun,” Scottsdale, Arizona and San Carlos, Sonora, Mexico. He and wife Connie enjoy snorkeling, hiking, hanging by their swimming pool and traveling to the different beaches of Mexico while sipping on a cold Cerveza or Margarita blended with Rico’s favorite TEQUILA.

Rico Austin first began writing seriously as a seventh grader at age 13. He was elected as the reporter for the Eager Beaver 4-H Club in Marsing, Idaho, and started submitting weekly articles to the local newspaper. Rico then was elected reporter for the local FFA chapter his freshman and sophomore year, continuing to expand his writing ability. As a freshman, Rico took third place in the Marsing High School essay contest titled American Beef Farmers. He later would later become a professional freelance and feature writer for DAS TOR newspaper at Thunderbird Global School of Management from 1996 – 1998. Rico also won the first and only writing essay at DAS TOR in March 1997. The essay asked contestants to propose ways for Thunderbird to be improved. Rico used his humor, knowledge of several countries that he had visited and innovation to secure the winning essay.

One of his most serious assignments and pieces of journalism was reporting on the Winterim class 97, “US Foreign Economic Policy” in Washington DC including the opening of the 105th Congress and the Inauguration of the President of the United States – Mr. Bill Clinton. Make sure you visit his full Awesomegang  Author Interview!

Here are a few of Rico’s Favorite Things!

Favorite movie, “Gone with the Wind”

Favorite comedies, “The Hangover” & “The Wolf of Wall Street”

With Zach Galifianakis of “The Hangover” at Harrah’s in Las Vegas!

Ernest Hemingway’s  “The Old Man and the Sea”

Jack London’s  “Call of the Wild” 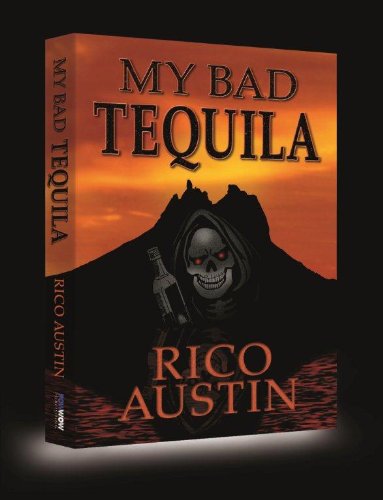 His first children’s book, ARIZONA Is Where I Live was published February 14, 2013. This was the same day as Arizona’s 101’th Birthday.

Rico’s autobiography/memoir In the Shadow of ELVIS, Perils of a Ghostwriter was published April  2013.

Son of the KING, an ELVIS paradox unveiled is Rico’s fourth book and is a biography published in February 2014.

Amigo Rico is all over  Facebook Baby! & on Twitter  so go connect with him and know when his next book will be releasing and working over on GoodReads.

AND?
I told you he had ALL THE Ladies Hangin around HIM! Lol.