Nothing but Action and Adventure will be
found in The Billy Battles Trilogy by Author
Ronald E. Yates.

The novel’s narrator is the great-grandson of Billy Battles, whom he meets for the first time when the old man is nearing the end of his days. The story unfolds from there, in this case. underpinned by letters and diaries as well as the old man’s recollections, taking the reader on a rollicking romp through the Wild West. There are smatterings of fact about the  historical characters who appear throughout this first volume of what is designed as a trilogy. The book conveys a real-life ambiance through the author’s diligence in whipping up authentic Kansas dialogue.

The Finding Billy Battles trilogy tells the amazing story of a man who is born in 1860 and who dies in 1960. In between Billy lives an improbable and staggering life of adventure, peril, transgression. and redemption. Then Bill mysteriously disappears. For several decades his family has no idea where he is or what he is doing.

Finally, with his life coming to an end, Billy resurfaces in an old soldiers’ home in Leavenworth, Kansas. It is there when he is 98 that he meets his 12-year-old great-grandson and bequeaths his journals and his other property to him — though he is not to receive them until he is much older.

Years later, the great-grandson finally reads the journals and fashions a three volume trilogy that tells of his great-grandfather’s audacious life in the old west, as well as his journeys to the Far East of the 1890s–includingFrench Indochina and The Philippines–and finally, in the early 20thcentury, to Europe and Latin America where his adventures and predicaments continue.One thing readers can be sure of, wherever Billy Battles goes trouble is not far behind. 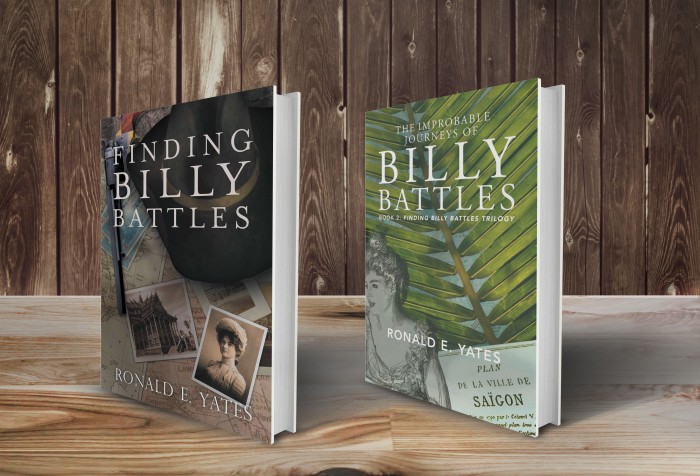 I normally find the second book within a trilogy or longer series somewhat lacking in comparison to first. In fact, I’ve come to expect it as a given rule and start reading every sequel with that same expectation. Then, every once in a while as I’m sitting there feeling quite smug in my conviction, A Ronald E. Yates comes along with a sequel every bit as good as his previous five-star work. It’s mind-blowing.

Finding Billy Battles is a historical fiction series like no other and reads like a memoir making it all the more believable. The story quickly draws you in and doesn’t let go. There is so much going on, you’ll be riveted for hours.

This particular work picks right up from where the first ended and it’s like you never put it down. Billy Battle’s journey from the Wild-west to the Orient becomes fraught with adventure and new dangers as he finds himself caught up in the middle of the Spanish-American war which is closely followed by the war of the Philippines. Not to mention his relationship with a German baroness whose character you cannot help but fall in love with. Another character I absolutely loved was Potts.

Then there’s Yate’s affinity for languages and colloquialism. I do not know all the languages, but judging from the ones I am fluent and know a little of, I found the phrasing and expressions to be spot-on; their use added much credibility to the story.

“Billy ain’t in Kansas anymore!” Highly Suggest This One!

I really enjoyed reading the first book, Finding Billy Battles, so I was excited for the opportunity to read this second installment of the series. The Improbable Journeys of Billy Battles did not disappoint. The historical events were woven into the narrative in a masterful manner. William and his close friends were usually participants in the events of the day, sometimes unwillingly. I was fascinated by the events in the Philippines as my knowledge before reading this book was non-existent.

I loved the way in which the story is told, it made me feel like I was experiencing those tribulations right along with the characters. Thought-provoking and intelligently portrayed, this exciting, action-packed book can be read as a stand-alone, but will be more fully enjoyed by reading the previous book before jumping into this one. I am really looking forward to the next book in this trilogy. For those who enjoy good historical fiction this book is highly recommended.

I was provided a copy of the book in exchange for my honest review.  🙂

It’s been decades since I read anything resembling a wild-west story/legend. This historical fiction is that, and so much more. I take my hat off to Yates for providing me with one of the most entertaining stories I have ever read.

Yate’s is a truly gifted story-teller. He can take a well-known historical figures like Wyatt Earp and Doc Holliday and develop their characters in such a way that you feel like you didn’t know them as well as you thought, and you are left with the utmost admiration for them even though this story is not actually about them.

The story is really about Billy Battles, who is but a scrivener/journalist and his unfortunate clash with the Bledsoe family/gang that sends his life into a spiraling adventure throughout the old west fraught with life threatening situations and confrontations with some of the most notorious criminals of the time.

It is a truly amazing tale. I was captivated for hours. The penmanship is excellent. I did find some repetition in places, but this can be so easily amended, I found no issues with awarding the full five stars.

I am looking forward to reading Yate’s second & third books in this series!

In this the second book of the Finding Billy Battles trilogy the Kansas gunslinger sails to the Orient in an attempt to evade pursuing Pinkerton detectives. Grieving over the death of his wife, Billy hopes the mysterious East will provide the spiritual balm he desperately seeks. But it is trouble not tranquility that Billy finds aboard the S S China. A beautiful German baroness in distress enlists a reluctant Billy to join her on an adventure that transports the couple across three continents. Ron Yates’s knack for replicating authentic 19th century settings populated by intriguing characters both educates and entertains. This is a fun book, enjoy! Martin Henley.

**Ok, now you have read the fantastic book reviews, so go grab both books one and two and be ready for action and adventure in book three! ***