From The Author who brought us the steamy, sexy thriller “Behind The Door” has just Released Book Two of her series titled; “LARA’S Journal” A Sizzling, Psychological Suspense (Hidden Motives) .  .  .  .

ABOUT THE NEW BOOK:

Simone Bennet is on a long vacation, trying to heal from the trauma she suffered at the hands of a serial killer kidnapper. After looking death in the face, she tries to develop a new outlook on life—live in the moment!

Carl, the charming lawyer, is back, asking once more for Simone’s help, this time in analyzing Lara’s journals, which were discovered by her siblings after her death. In her own words, Lara divulges all her secrets, and reveals a dramatic world of betrayal, passion, and the most unusual sexual behaviors, exposing the beautiful architect’s troubled life.

As Simone tries to deal with the contents of Lara’s haunting diaries, one of her patients gets himself into a bit of legal trouble, forcing Simone to return early from her vacation. Although she’s happy to be back on her home turf, she finds herself surrounded by a whole new set of problems.

A killer is out there, and this time, he seems to be after the people Simone cares about most. Suddenly, people around her are dying, a stalker/admirer keeps showing up at all the wrong times, and Simone’s dear friend Edward has a new girlfriend—forcing Simone to analyze her feelings for him and her attraction to Carl.

ABOUT THE ROMANCE AUTHOR:

A. Gavazzoni the Brazilian indie author of a novel series “Behind The Door,” a sensual romance thriller and now released is book two titled; “Lara’s Journal: A Sizzling, Psychological Suspense” (Hidden Motives) exclusively on Amazon and Amazon Kindle.

Gavazonni is a lawyer by day and former professor of law; she writes (novels and legal books), but she is also a voracious reader and a writer by night and currently has a law book about international contracts published in Brazil.

She speaks four languages: English, French, Portuguese and Spanish, she also studies Chinese and hopes someday she will master it (but it’s been a challenge!). Her favorite countries, no surprise, are Italy, France, and the USA. When she is not practicing law, she enjoys many interests and is a very active person. She loves to dance (Tango) and workout.

She loves to travel, loves good wine, and has been studying astrology for fifteen years. She paints and loves to cook.

She has two poodles -Gaia and Juno -and loves all animals. She is an aunt of four nieces who enjoy to paint and cook alongside their aunt. She lives in Brazil and visits New York City often and is in the process of writing more books to be included in this steamy thriller series. She invites readers to visit her website/blog anytime for updates of upcoming books and events at Meet Author A. Gavazzoni .  .  .  .

Please Connect With The Author On Social Media:

Grab a copy of Book One: Behind the Door: A Sizzling, Psychological Suspense (Hidden Motives)

“Amazon.com: Behind the Door – Kindle eBooks: Kindle Store And A New Award Winner!” 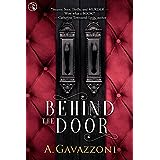 *A very special Thank You to the Author for the kind words in her Beautiful Dedication Page of Book Two* . . .  “Adriana, I was blessed the day we met and became fast friends and Kindred Soul Sisters. Thank you for your friendship!”