It is here! The Time Is Here Mystery Readers! My girl Kim Carter has released book one AND NOW BOOK TWO of The Cara and Iris Novel Mystery Series,” dropped titled; “Murder Among The TOMBSTONES!”

Kim is a ‘Mystery Fan Favorite’ among readers and they all have been patiently waiting for her new series. With fresh new book covers and fantastic new publisher, Raven South Publishing for both “Sweet Dreams, Baby Belle” and “Murder, both reads of this series will blow your mystery socks off!

And? Hold on to your thriller hats because soon after book two releases? Book one will be on E-Book Special Promo Price too! So let’s learn more about both books and go grab “Sweet Dreams” so you can be ready to read….the continuation of this fabulous novel series…

ABOUT Book One – Sweet Dreams, Baby Belle now released on

Waitress Lizzie Headrick thought she had finally met her prince charming in Dr. Grant Chatsworth. She was young and in love, and their quick courtship ended with the four karat diamond engagement ring of her dreams.

Now residing in one of Buckhead’s finest estates, Lizzie soon learns all that glitters is not gold. Her handsome husband, a renowned cardiac surgeon, and developer of a new congestive heart failure drug was becoming cruel and controlling. She finds herself captive in the vast expanse of his estate without a phone or car, and under the watchful eye of Flossie who runs the household.

When Lizzie discovers that Cardiac Care Research, his drug development company, is a Ponzi scheme, she realizes her life could be in danger if she doesn’t somehow escape the gated mansion on the hill. Her only hope is to get to Biloxi, Mississippi and seek refuge with her sister, Maggie. Maggie and her husband, Leland, quickly find a safe harbor for Lizzie in a house on the bayou. However, the house at the end of the street might not be the quiet retreat Lizzie was hoping for.

As the confines of her hideaway close in on her, she retreats to the small historical cemetery next door where the small, damaged tombstone of a child soon catches her eye and captures her heart. Just when Lizzie Chatsworth thinks her world can’t get any more complicated, she finds herself in the middle of a mystery from the 1800’s that is pulling her in and demanding she seeks justice.

As her husband’s empire begins to crumble, he’s more determined than ever to find Lizzie and eliminate her. But, will the mystery of the small tombstone shatter Lizzie’s life first?

ABOUT The New Release ~ “Murder Among The TOMBSTONES”

When Atlanta homicide detectives are called in to investigate the murder of a nineteen-year-old girl found dumped in historic Oakland Cemetery, they immediately begin working the case.  But with no leads to follow, and their case log growing larger by the day, the murder quickly grows cold.

Desperate to keep the investigation of her deceased sister going, Ginger Baines hires two novice sleuths to solve the case.  Widowed, well into their seventies, and new to the world of private investigating, Clara Samples and Iris Hadley aren’t your average private eyes. 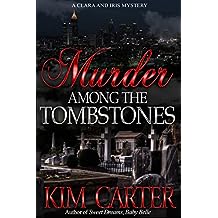 When a second body is found in a neighboring cemetery, the plot thickens.  With two bodies wrapped, almost lovingly, in a soft blanket before being discarded in a cemetery, could a serial killer be on the loose?

Joined by their young apprentice Quita, Clara and Iris are determined to stop at nothing to find the killer before they can strike again.  But, will their bodies be the next ones discovered among the tombstones? Grab your Copy Today!

“Two crafty septuagenarian widow’s turned private investigators; a crabby Atlanta cop recovering from a gunshot wound, and a cunning killer who dumps his victims rather appropriately in cemeteries. Those are just a few of the zesty ingredients in Murder among the Tombstones, the latest whodunit by Georgia-based mystery writer Kim Carter. It’s a fast-paced, twister of a mystery that keeps you turning pages until the very end.

–Ronald Yates, foreign correspondent for The Chicago Tribune and author of the Billy Battles Trilogy.

“The wait is finally over and Author Kim Carter has blessed the readers with yet another great suspense -filled read. Her dynamic pen is one of the smoothest I have read. I was able to replay her words in my head, creating a consistent, flowing movie full of action and emotion. Carter has a gift for detail, dropping things here and there, just enough to give us a mental picture. She grabbed and twisted me up in her world from the first paragraph till the last.”   ~Lissha Sadler “MZWRP”

Kim and her husband Julius have raised three beautiful successful grown children and have vested in retired greyhounds, and they enjoy attending the many events held annually for them, as well as educating others about their need for great homes and what great pets they make after retirement.

Kim, a college graduate of Saint Leo University, has a Bachelor Degree of Arts in Sociology. She worked in Human Services in the Grant Division before becoming an author. She lives in Atlanta, Georgia. Between reading and traveling with her beautiful family, she will continue to write mysteries for some time to come for her avid readers.

You can learn about all of Author, Kim Carter’s books, connect with her now on
GoodReads   Twitter and on her  Facebook Fan Page