Skip to content
HomeSpecial Guest Article and Blog Share Celebrating July 4th Weekend. By Tony Roberts Who Gives Us Something to Think About.

The Cost of Freedom ~ By Tony Roberts Blog ~ Delight in Disorder

I went to a fast food restaurant for dinner the other night. The guy ahead of me had just come home from Afghanistan. He was buying dinner for his son and himself. The total came to over $20.00.  He didn’t have enough. They said they would give him a 10% military discount. Still not enough. He started deducting his order until he could afford it.

Then I saw a man who had heard this haggling hand him $100 bill and say, “Thanks for your service.”

The soldier teared up and said, “You don’t know how much this means to me.”

The man smiled and said, “You don’t know how much what you do means to me.”
I posted this story on Facebook and it has gotten nearly 100 likes and 10 shares. It shows that people really want to care about those who wage war in defense of our nation’s freedom. I’ll confess, I was moved to tears watching this happening. There is still hope for human compassion in the face of so much hate.

The soldier could have been a Trump-supporter, the donor a devout Democrat. It didn’t matter at this moment. At this moment, it was one man giving back to another who had given so much to him, so much for all of us.

So what do we do with the hope this engenders?

First, go and do likewise.

There are over two million soldiers in the US. The average income for a front-line private is less than $2,000 a month. Personal gifts (monetary or material) to military men and women you know or can meet is a great place to start. Rather than post a scathing remark against high government wages or benefits of non-US citizens, put your money where your mouth is. Cultivate a culture of caring for those who give so much to us.

Second, watch out for wounded warriors.

Every day, another veteran dies by suicide.

Mental health experts both in the military and in the civilian society desperately scramble to learn more about Post-Traumatic Stress Disorder (PTSD) and how to treat it. No solutions are at hand. We may think if the experts don’t even know what to do, how am I going to help? Well, it doesn’t take an expert to reach out and be a faithful friend. And that goes a long way toward healing.

Former 5-star General and President Dwight D. Eisenhower knew the cost of war, both on the soldiers who fight, the families left behind, and the society as a whole. He spoke passionately against the military-industrial establishment with these words:

“Every gun that is made, every warship launched, every rocket fired signifies in the final sense, a theft from those who hunger and are not fed, those who are cold and are not clothed. This world in arms is not spending money alone. It is spending the sweat of its laborers, the genius of its scientists, the hopes of its children. This is not a way of life at all in any true sense. Under the clouds of war, it is humanity hanging on a cross of iron.” ― Dwight D. Eisenhower

Eisenhower knew better than perhaps anyone how to build a strong military. And he warned gravely that stockpiling weapons of mass destruction was no way to win a battle against enemy aggression. Building a strong military meant investing in the lives of our soldiers and our society as a whole.

There is a cost to freedom. What are you willing to give?

About the Author: tonyroberts

“I  first sensed a calling to be a writer at the age of nine when I composed my first poem, “Ode to My Pet Rock.”

I was born and raised in the Hoosier heartland just south of Indianapolis. I grew up worshiping high school basketball and once had the honor of playing in a televised “game of the week.”

I went to Hanover College (alma mater of both Mike Pence and Woody Harrelson – (go figure). After many detours into sex, drugs, and more folk rock than roll, I wound up at a seminary and became a pastor. It was then that symptoms of depression and mania culminated in a psychotic episode that became pivotal in my life, for better and for worse.

After graduating from Hanover, I obtained a Master of Divinity degree from Louisville Presbyterian Theological Seminary. While there, I did ministry assignments at a state hospital for persons with developmental disabilities, as well as at a women’s prison, and an inner-city hospital.

I served two decades as a solo pastor. I then shifted to writing, speaking, and leading small groups. In March of 2014, I published my spiritual memoir, Delight in Disorder: Ministry, Madness, Mission. Having served in pastoral ministry and gone mad, it’s now my mission to bridge the gap between faith communities and the mental health world.

I now live in Columbus, Indiana, with supportive family and faithful friends who keep me honest and encourage me to be who God created me to be. My greatest earthly delights are my four children and two grandchildren, with one more on the way. “The soul is healed by being with children.” (Fyodor Dostoyevsky) 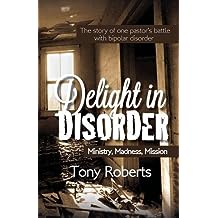 Delight in Disorder was published in part through a successful Indiegogo crowdfunding campaign.

One thought on “Special Guest Article and Blog Share Celebrating July 4th Weekend. By Tony Roberts Who Gives Us Something to Think About.”