Diane Olsen’s second book has now released and Cat is so excited to debut right here on “Cat Lyon’s Reading Den!”  I know readers are going to ENJOY this one and as a Celebration of the Release? Diane has put the E-Book on sale for us at just .99 cents for a short time! So grab yourself a copy and Happy Reading!

,,,
Author, Diane Olsen, is the prolific writer and award-winning author of her debut book titled; “Ancient Ways: The Roots of Religion.”

Her Ancient Ways is thought-provoking and an informative look at the development and evolution of religion throughout time and a well-considered concept – the idea of a connective thread of monotheistic faith throughout the history from the birth of human creation.

Now comes her new release titled; “RISING WIND: The Thunder Beings” (Book One a Series.) Adapted from an original screenplay Diane wrote several years ago, she has now written it for all her readers to enjoy as an amazing Fiction, Action Adventure, with Super Natural and Mystery elements.

Diane was born in Colorado Springs, Colorado and she now lives in the beautiful Pacific Northwest and the State of Washington. Diane was an Undergrad at Colorado State University Ft. Collins: Pre-vet med, Anthropology, then attended and received her BA and MA at the University of Montana, Missoula: Anthropology, Archaeology, and Paleontology. She was a Graduate Teaching Assistant for two years.

A few of her favorite books are ‘The Book of Certitude (Kitab-i-Iqan), The Upanishads, and The Great Initiates.’ 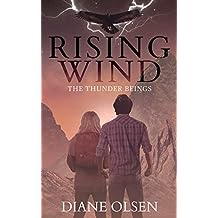 An American businessman is assailed by dreams of a Thunderbird who needs his help, despite his strong denial of his native Lakota Heritage.

To make things worse, he is told to find a woman he doesn’t know in a South American jungle to help him solve problems initiated by his former business partner, and aid the Thunder Being in the process.

With help from several Indigenous healers, Secora James and Gideon Yellow Thunder face hardship, sorrow, and death on their path to find out what the Thunderbird needs from them, and what she can give them in return.

Together they find a giant sloth and the source of imminent slavery, abduction, and death on a volcano.

Together they face death to save Wakinyan Tanka, the great Thunderbird and bring greedy assassins to their justice …

,,,
Again, Diane is celebrating her brand new release with E-readers everywhere and has priced her new book for just .99 CENTS through the Holidays! Makes a great last minute gift idea and FREE for Kindle Unlimited readers! Don’t miss this amazing read!