Welcome Readers, especially all my readers in Ontario, Canada!

Those of readers who just happen to live in and around the area of  Welland, Ontario area?

You don’t want to miss this! Favorite Best-Selling Canadian Author, Ms. Rusty Blackwood is coming for a book signing, and she has two fabulous new book releases to share, at Coles, she will be sharing with you “The Perils of Autumn” and excited to do so!
Here is a special message by Rusty.

…….
“I invite you to join me for the first official book-signing launch for “The Perils of Autumn,” my latest 5-star-award-winning romantic fiction drama, happening April 6th/19 at Seaway Mall COLES in Welland, Ontario, between 1 – 4:30 pm.

I am pleased to bring this heart-touching drama to Welland readers, and I hope you all take advantage of the chance to obtain a signed copy by yours truly of this exciting read.” 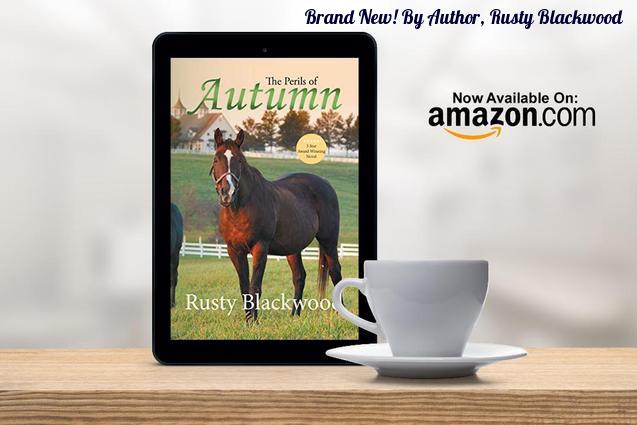 ‘PERILS,’ a page-turner, set primarily in the early 1970s, centers on a young Kentucky woman, Autumn Leeves, born in 1946 to Abigail Leeves, an unwed mother who struggles to make ends meet. By 1970, Autumn graduates nursing school and is sent on assignment by the local hospital to care for the terminally-ill wife of middle-aged English equestrian master, Cyril Landon, owner of Landon Lawns Stables, a most successful thoroughbred racing stable located just outside Lexington, Kentucky in the posh community known as The Meadows.

Duff Taylor, world renown jockey who is tops in his field, lives full-time above the tack room at Landon Lawns and enjoys the many benefits it brings, but he also has a dark secret surrounding an unsolved racing incident from his past that he will go to any length to protect.

Autumn arrives at Landon Manor in time to be thrown into the fray and finds herself caught in the ongoing disruption that ensues.

……
Rusty has also released another writing “labor of love” and continuing her comedy series about Mr. Derwood J. Tugbottom with book threes and hilarious, “DERWOOD Goes CARIBBEAN.”  Now I had decided to begin DERWOOD from the beginning with book one of “The Misadventures of Derwood Tugbottom.” And so far? A great and humorous read thus far!

Then will be book two titled; “DERWOOD RETURNS” and then book three! A little bit about book three of “DERWOOD Goes CARIBBEAN” …

The austere and proud Derwood Justice Tugbottom, dejected by a defunct love affair at his current residence, the swinging Sunset Villa Retirement Center, located in the picturesque village of Vine Haven On-the-Lake, convinces his best friend, down-to-earth Scotsman Robert McEwen – also wandering through life searching for the same contentment as Derwood – to join him on a new adventure.

Christmas of 2014 is fast approaching, and an intrepid Derwood talks Robert into taking a single’s cruise to the Caribbean with him, which sends them on another eccentric adventure. Will they find what they hope to aboard ship? Will happiness present itself in one of the ports of call, or will it avoid them altogether?

Romantic fiction author Rusty Blackwood, who chose her plume de nom by combining the colour of her russet hair with her husband’s great, great, Scottish grandmother’s maiden name, was born in St.Thomas, Ontario, Canada on October 5th, and grew up on her paternal grandfather’s farm in the County of Elgin, located in the south-western portion of the province of Ontario.

She acquired her love of literature while still in elementary school where she entered her original compositions into county fairs, school contests, and whatever venue allowed participants in the writing field. She has carried that love ever since and has put it to use many times since becoming a professional writer in 2001.

……
From the time of youth she has loved the Arts in their many unique forms and is a graduate with honors in Interior Decorating & Design. She spent many years on the south-western Ontario stage performing with her family’s country music band: The Midnight Ramblers, followed by the country – rock – blues band: ‘MIRAGE’ as an accomplished vocalist, bassist, and rhythm guitarist.

She now resides in the cultural city of St. Catharines, Ontario.
lease visit her official website Author, Rusty Blackwood for numerous reviews, and information on her work.  You may also visit her official poetry site, ‘Inspiration In Thought.’

…..
“Rusty Blackwood believes the flair for fantasy is anything the mind wishes it to be, and she is a master at this. Within her expressive mind is found an endless array of romance, passion, textures, and colors to sweep the reader to exotic, faraway places where anything is possible, proving that her words really do leave you breathless.”
(Photos Courtesy of Doan’s Photography”)