Skip to content
HomeCat Welcomes Our Newest Author To The Reading Den Family. Meet Uncle Dave Howard and His Fun Teachable Children’s Books. He’s Our New Unique and Special Friend At The Den!

Cat is excited and honored to welcome our newest amazing author to “Lyon Media Services and who Cat will be representing and promoting everywhere and here at “Cat Lyon’s Reading Den.”

Meet Author, Dave Howard! Dave “is the man” behind many beautiful and fun children’s books he has published and illustrated.

Uncle Dave and his books are well-known around the great state of PA., aka, known as Uncle Daves Books. He is a special and unique seasoned writer,  illustrator, and publisher of a large array of his children’s titles. Some are his own and some with other co-authors. He is unique in the fact that he is autistic and keeps this in mind when writing and illustrating all of his children’s books with bright colorful images and funny characters and each one has a “teachable lesson” between the pages.

His goal is to help open the minds and imaginations of children, but especially those who may have disabilities or challenges as he had growing up as a child. Uncle Dave wants his books to be fun tools to open the door to any child’s imagination and inspire them. Learn to know they can be or anything they set their little minds to know in their world, “All Things Are Possible!”

Uncle Daves’ Books always bring loads of joy, fun, vibrant pictures and characters to children when he visits and speaks at many schools around his state and nationally.

And? Now that the holidays are around the corner, parents, and grandparents can purchase all of Daves Books as great gift ideas for your “Tots” and feel good when purchasing as several of them Uncle Dave donates a $1.00 back to S.I.D.S. research, education, and prevention.

Here now is an amazing write-up all about Uncle Dave Howard that shares his backstory about how Dave has gotten to where he is today posted and courtesy of his website of  “Uncle Daves Books” and written by L. Scott Pishko.

Uncle Daves’ website is a must-visit for parents, mommy-bloggers, and grandparents to see all his books available for your “little ones” and all the amazing Book Awards his books have won!

Award-winning local children’s author, David Howard could be considered all of these and more. Born on an unusually hot spring day in 1974, Dave M. Howard came into the world and before long he was struggling to see what the world had to offer. He was prescribed glasses at age four and his world changed from a fuzzy, confused world to a world that was clear, but somehow still confusing. His humor was an outlet as he asked such questions as “Wow, is that what aunt Verna looks like?” and “Is that what grass looks like?”. Dave was soft-spoken, but an easy-going child who took to art and storytelling as an escape from the world of restrictions to a world where he could become a superhero, dragon or whatever his imagination put on paper.

Once Dave started school, he had trouble reading and writing and was placed into a special class that catered to children with learning disabilities. What the school did not know was, he had A.D.D. (attention deficit disorder) Asperger’s and dyslexia. The combination of disabilities and attending the special classes at school left him open to harassment and bullying by other students within the confines of his personal prison. The walls closed in around him as he knew he was too smart for these classes, yet couldn’t pass the mainstream curriculum presented to him. Dave’s hindrance was he couldn’t spell correctly because as he puts it “ I would get things backward in my mind”.

“His life was about to change with a gift from Father Christmas himself, Santa Claus.”

Every kid, young and old alike, anticipates Christmas. That magical holiday where anything can happen and dreams come true. This was especially true for young Dave Howard in junior high school. He trudged down the stairs to find many glossy wrapped presents with bows and strings. The sparkle of the Christmas tree reflecting from young Dave’s eyes as he tears into the first few presents.

With Christmas music playing in the background, he thinks he’s finished when his dad states“  “There is one more present left, check it out.” He pointed out a white envelope nestled in the tree. Dave opened it and saw a clipping of a word processor. “where is it?” Dave asked. His dad pulled the processor from the back of the couch and handed it to the youngster. Dave opened what would become the catalyst to open up his confidence as a storyteller and creator of children’s books.

This machine turns his imperfections into a workable palate, a clean slate to turn into whatever he wants it to become. This machine was a word processor. This word processor had spell-check and became the answer to all of Dave’s creative prayers. He was able to use this machine to do his homework and as Dave said: “It opened a new avenue to my world and it was one of the most influential presents I received”.

Before that point in his life, the only artistic thing he did was draw and paint. He began to create new worlds and stories, as he puts it “The stories just flew off the top of my head and on to the keyboard”. He says this with a smile and not a little relief. By the time he graduated from Ringgold High School in 1992, Dave had produced stories in many genres including westerns, science fiction, horror and his current work, children’s stories.

With his newfound confidence and with amazing talent to tell a story he traveled to Pittsburgh, PA to attend the Art Institute of Pittsburgh. While attending the school, he found a love for the editing program Photoshop, which he will continuously use for his illustrations for his books in the future. After he graduated with an associate’s degree in Visual Communications in 1995, he looked for several jobs, but they kept telling him he needed job experience; even though no one would give him a job to obtain that experience.

Frustrated, Dave then attended the California University of PA and joined every creative class he could. He excelled in classes such as illustration, stained glass, sculpture, printmaking, and pottery – not bad for a guy who was “learning disabled.”  All was going well for Dave and then the first tragedy in his life would strike as he was just building his confidence as an artist. His best friend committed suicide in April 1999 and send him into a downward spiral that would take a long time to pull himself out of.

In 2009, his niece was pregnant with her daughter and was celebrating by having a baby shower. Dave remembered he had a poem about a dog set aside and he thought that would be a cool present to give to her. The more he thought, the more he wanted to turn it into a children’s storybook for her baby shower. The book was a big hit and was appreciated very much giving Dave a shot in the arm to continue his talented storytelling.

Sadly, his great-niece passed away from Sudden Infant Death Syndrome (S.I.D.S.) when she was two months old. In an effort to cope with the loss, Dave put his nose to the grindstone and rewrote the book that became “Lady’s Day To Play”. The book became a talisman for Dave and he dedicated the book to his great-niece and donates a portion of the sales of his books to S.I.D.S. research. Once Dave regained focus he became driven to create more and more stories. 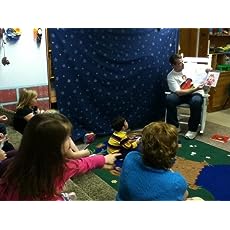 After “Lady’s Day To Play” he wrote numerous books. He produced “Mouse In The House”, “Baby Ben Did It Again”, “ The Cloud That Couldn’t Cry”, “Sandy Claus the Christmas Cat”, and he published “Morgan To The Rescue!” written and illustrated by Morgan Barnes. He also illustrated “Legend of Rain Day” for Isabel Linnie Fox.

Affectionately known as “Uncle Dave”, he tours local schools, libraries, festivals, and universities reading to the masses and giving children advice on how they can create books from their imagination. Uncle Dave was reading at Monongahela Library when a woman walked up to him afterward crying. He remembered her quickly; she was his Learning Disability teacher from high school. She was so proud he persevered and overcame his disabilities.

Recently, Uncle Dave Howard read at the Barnes & Noble store in West Virginia and is making progress on his next volume of books including a Halloween book and rewriting his Christmas book “Sandy Claus the Christmas Cat.” He also was featured on the Waynesburg University television program “Greene Room” and was a finalist in the Best Books Awards for Children’s picture book softcover fiction.

Wow … That is some backstory, RIGHT?
Who doesn’t admire and be inspired by an amazing guy who has made his “personal best,” goals, and dreams come true and turn it into a professional business of “Uncle Dave Howard’s Books” all for the love of kids who may also have the same disabilities and challenges as he has or has overcome? I feel GOD had his hand in this one!

Uncle Dave has gone on to write, illustrate, and publish more books since this write-up and his books are growing notoriety nationally with winning more Book Awards! (See bottom of this post) …

AND? He has a brand New Book Released just in time for the holiday gift-giving for your “little ones” titled; “Green Pickle Juice!”

I’m sure your kids know what ‘Pickle Juice’ can be used for? But the CAT will give you a HINT? #Ghostbusters! Lol.! Now available now as a paperback on “click here on Amazon”

……
“Do You Have Any Use for Green Pickle Juice? You will learn the answer to this question and more in this fun, silly tale.”

…….
What more fabulous things can CAT share with about Uncle Dave Howard? Where you and your “TOTS” can connect with him through Social Media and go grab all his books for your little tots for Christmas as they also make great stocking stuffers too! “-)  **Cat**

One thought on “Cat Welcomes Our Newest Author To The Reading Den Family. Meet Uncle Dave Howard and His Fun Teachable Children’s Books. He’s Our New Unique and Special Friend At The Den!”